On June 5, the Augusta-Richmond County Board of Commissioners voted 6 to 3 for a smoke-free air ordinance. The ordinance restricts smoking and use of e-cigarettes in bars and all enclosed areas in places of employment. BreathEasy Augusta, the American Heart Association, Augusta University Health System, Augusta University, the Family Y of Greater Augusta, the Georgia Cancer Center, the Georgia Department of Public Health and community supporters were in attendance during the vote. 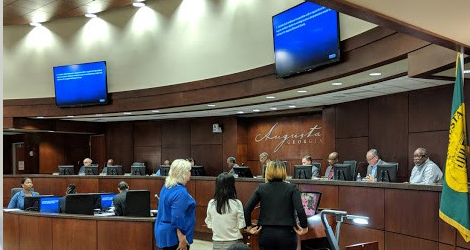 “It has been a long, hard victory, but it is for the health of our community,” said Jennifer Anderson, chairperson of BreathEasy Augusta.

During the months leading up to the vote, the BreathEasy Augusta coalition and supporters wearing “We Support Clean Air” stickers presented years of evidence-based health and economic studies with scientifically proved data. At the same time, business owners and representatives wearing “Butt Out of My Business” stickers argued it was their right to determine the smoking status of their business. They believed a smoke-free air ordinance would negatively impact business.

Jennifer Anderson, Danielle Moores and other BreathEasy members, along with community partners and supporters worked diligently to provide education to the community on the adverse health effects of secondhand smoke exposure and the positive health and economic outcomes associated with passage and implementation of smoke-free air ordinances. The efforts resulted in the mobilization of the community to action.

“The comprehensive smoke-free ordinance adopted by Augusta-Richmond County will protect 201,798 people, increasing the overall population protected in Georgia to 533,646,” said Oluwayomi Fabayo, MPH, with the Georgia Department of Public Health, Georgia Tobacco Use Prevention Program. “Augusta-Richmond County is the seventh municipality in Georgia to exhibit leadership in protecting the health of its citizens from the harmful effects of secondhand smoke exposure.” 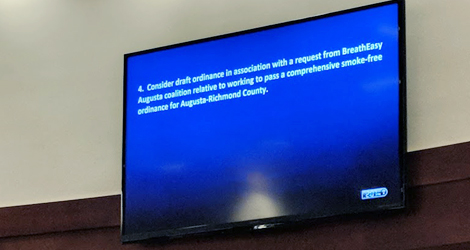 During a workshop prior to the vote, Vinayak Kamath, M.D., former chief of cardiothoracic surgery at Augusta University Health, shared his experience seeing the effects of secondhand smoke exposure through exacerbation of asthma in children and people in their 30s with lung cancer.

Other supporters presenting to the Board of Commissioners that day were Martha Tingen, Ph.D., associate director of the Georgia Prevention Institute, and Stephen Goggans, M.D., health director for the East Central Public Health District. They provided education on scientific health studies and education on the negative health impact of secondhand smoke exposure.

With the adoption of the ordinance, smoking will also be prohibited in enclosed residential facilities, such as private and semi-private rooms in nursing homes, and at least 80 percent of hotel and motel rooms rented to guests. Violations are $50 for patrons and $100 for businesses. Repeated violations may put owners’ business licenses at risk.

“The passage of the ordinance is a positive step forward to providing health protection from secondhand smoke exposure across all populations for today and future generations,” said Sadie Stockton, Chronic Disease Prevention Program Manager for East Central Public Health District VI. “The health department looks forward to working with BreathEasy Augusta and partners on the implementation of the smoke-free ordinance.”